"Put the focus on the right swing and the ball flies as desired."

The power of habit – it is not easy for you to implement new swing movements immediately and consistently; imagine you are buying a new piece of furniture to create a better spatial arrangement. To place it you need to rearrange some things in the room. This leads to a change in your habits. The jackets no longer hang on the right but on the left, but your head sends you to the right first. A strange feeling is spreading in you. A change. And why should you change your habit? Because the space is now better divided than before! Conclusion: having the goal in mind, patience, perseverance and perseverance will help you build and change your swing. And above all: swing lightly by reducing your strength!

Increasing Training Intensity/Ability to Concentrate – How to Improve Your Golf Swing? It is primarily the increase in concentration on the body and club that will allow you to achieve better results. In swimming, it’s endurance. If you swim 500 meters without a break and want to swim 1000 meters, change your training program to get fitter. Accept that it will be more strenuous. Conclusion: Train your golf swing in such a way that you feel it more and more intensively! Also check out my ForeverInTheGame Feel It Stick videos here on Youtube. Change consciously and keep getting better!

Practice 2: Again, hit a 7-iron from the tee just 50-70 yards, but this time look forward, ignoring the ball.

Ability to concentrate: You can guide the club head to the ball with your eyes. How well depends on my physical condition. I’m not aware of the path the club head took. This is not really good for health. However, consciously guiding the club head and concentrating on it is a good alternative. Finding a way to swing the club head effectively and gently and to unleash your power brings consistency and joy to the game. Get to know your swing!

And always remember: Mistakes happen. They show exactly where something is missing. Accept them as a gift.

Training on the range:

train tee shots effectively by seeing or imagining yourself on different lanes on your course.
the positioning of the feet in particular is crucial in order to acquire good swing technique. You can precisely position the mat you are standing on or use aiming sticks. Take your time to see where your body lines and clubface are headed. 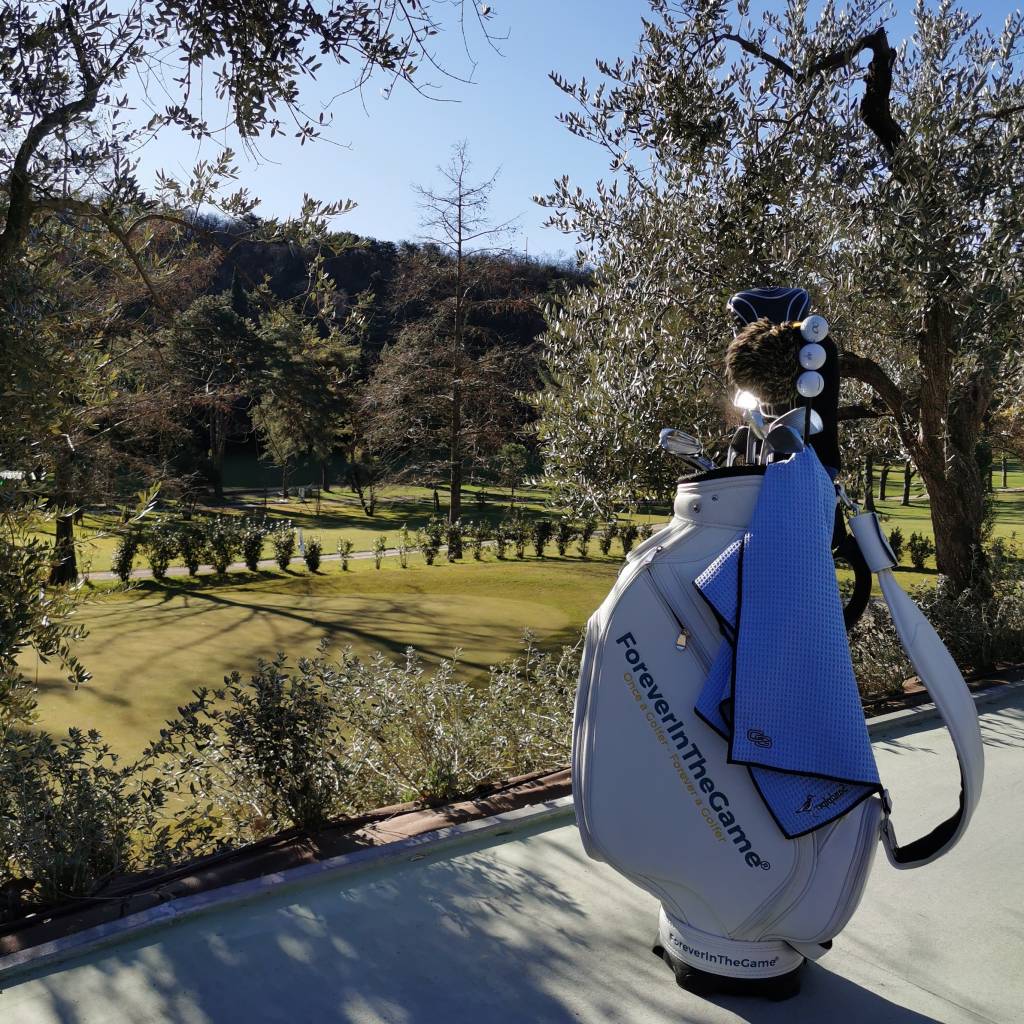 5 control points in the shot preparation – 1. the position of the club face and the body lines; 2. the grip position; 3. posture + weight distribution; 4. the distance of the feet from the ball; 5. Positioning the ball while standing

Ball is on the ground – the ball is supposed to fly as if it is sliding up a slide, i.e. starting flat and then spiraling up in the air due to the backward spin with the dimples in the ball, an ascending ball flight – when it reaches the highest point, it falls he down and stays straight – hit the ball slightly sideways from above/straight and then hit the ground

Ball is on the tee – now the ball should start higher, like a rainbow; a flatter dynamic ball flight with little reverse spin that lands softly and rolls out wide – swing as if you’re going to hit the ball in the middle while standing, but put the ball forward – you brush the ground in the middle and hit the ball slightly to the side from below /straight

Putting (medium and long): Before you hit, imagine the starting and ending speed of the ball! Pay particular attention to length control. Get a feel for the distance by looking closely at the putt line. But also remember to get used to the roll speed by putting in before the round.

Chipping (the short approach up to approx. 30 meters): Choose the landing point of the ball very carefully! Pick up a 7 iron more often and let the ball roll a lot. By using less power with this iron, you’ll be putting the sweet spot (the center of the clubface) directly against the ball more often. Leverage the mass of the clubhead by slightly bending your wrists on the backswing.

Pitching (the far approach): The ball slides up the clubface on good hits and gets backspin. Even flat shots can stop immediately at the flag! Now twist your hips a little in both directions, both your shoulders and your head freely through the ball towards the goal.

Tee off: Pay particular attention to your body position and especially to the position of your shoulder line so that it can match the trajectory of your ball! Maintain your momentum despite changing ball position!

For example, playing the ball forward while standing gives the ball more roll after it lands. However, this does not make it easier to hit the ball. So feel free to play the ball from the middle of the stand or only 1-2 ball widths in front of it. Caution: this changes the flight direction of the ball! In impact, the hands always remain in front of the ball.

Green Bunker: Remind yourself that the club is intended against the ball. Sand and ball slide together up the sloping playing surface and easily overcome the edge of the bunker! I recommend the pitch here!

The sand wedge has a heavier head weight than the other irons. Use this by keeping your wrists relaxed and swinging the weight.

Impact moment between clubhead and ball: Are you trying to get the club under the ball, but often hit the ground too early? In order not to hit it too early, do you start topping? Your hits will improve significantly if you always remember to bring the leading edge of the sole just slightly below the equator of the ball, i.e. the center of the clubface against the ball.

The right direction – hand and forearm rotation (rolling over): If your grip pressure is relaxed during the swing, then more or less hand crossing in preparation makes real sense. Pay attention to your swing rhythm so that it matches the “relaxed” grip pressure. The clubface will only face the target for a brief moment during your swing. Trust is everything.